Disclaimer: Dan (Velossatech) makes fantastic products, he's a great guy and I've supported him to the tune of several hundred clams via his wheel caps, emblems, and big mouth which my car proudly wears. I'm sure his diffuser fins are fantastic; in this case I felt like cooking up my own because I can, so I did. But kudos to him for the idea. Probably only the most patient and meticulous of us would do what I've done here; unless you fit into that category I recommend buying a set of these from Dan and save yourself the hassle. Hear me? Go give Dan some business, Dan is the man!!!

OK having said that, I made my own diffuser fins for the rear of the car. I was thinking of buying some for my next mod, but after my DIY mud flaps which turned out better than I'd hoped, I had a few leftover pieces of flap material laying there on my work table, they just happened to be in the shape of a diffuser fin....one thing led to another, and after about 3 hours of R&D I've come up with something.

I have yet to install these on the car because they are drying, but once I do I'll post pics.

For now, my progress:

1. MAKE A MOLD
This can be done easily with any sort of modeling compound (or play-doh), replicating the angle of the rear lower bumper and then forming a line parallel to the ground for the bottom. For curves I used simple 90 degree curves similar to the ones on my mudflaps, so that was easy. The good news is I only had to make 2 molds, one for the center and a second for the other fins. After testing fitting I might trim the fin to the right of the exhaust tips because for whatever reason it seems to stick out about 1/4" more, but that will happen later. So in reality there might be 3 different forms in the end.

3. MAKE FINS
Then I went hunting at Lowe's and Wal-mart for the right material. There are sheets of plastic available online but I didn't want to wait. After looking at numerous options I stumbled into the cooking aisle at Wal-mart....then I decided that the best material for my project would be a cutting board. This cost a mere $6. It's thick, super strong, easy to cut, weather-proof, and cheap. I traced my template, cut the fins with my jigsaw, then cleaned it up with an exacto knife. A bit of further trimming was needed but after that I got a pretty close to perfect contour to the lower bumper area.

4. APPLY TAPE and PAINT
I cut/applied 3M heavy duty tape and then put 4 coats of Plasti-Dip on the fins. I suppose you could paint these any color you wanted, but I like black.

5. APPLY
This will happen later as my fins are drying. I did some pre-measuring and marked everything....because of the honeycomb on the car it will be pretty easy to make sure the fins are symmetrical....

More pics to come once they are dry/installed, for now here are some of the R&D...

I believe there are also some FiST diffuser fin models on Thingiverse if you wanted to print your own. I haven't tried them since my printer is too small for them.

OK got them installed. I'm surprised at how well the 3M tape is holding these on.

I could've cleaned up some of the plastic and made it more smooth before painting but what the heck. It looks decent enough and I like the contrast with the grey/black.

Overall this was a fun project. 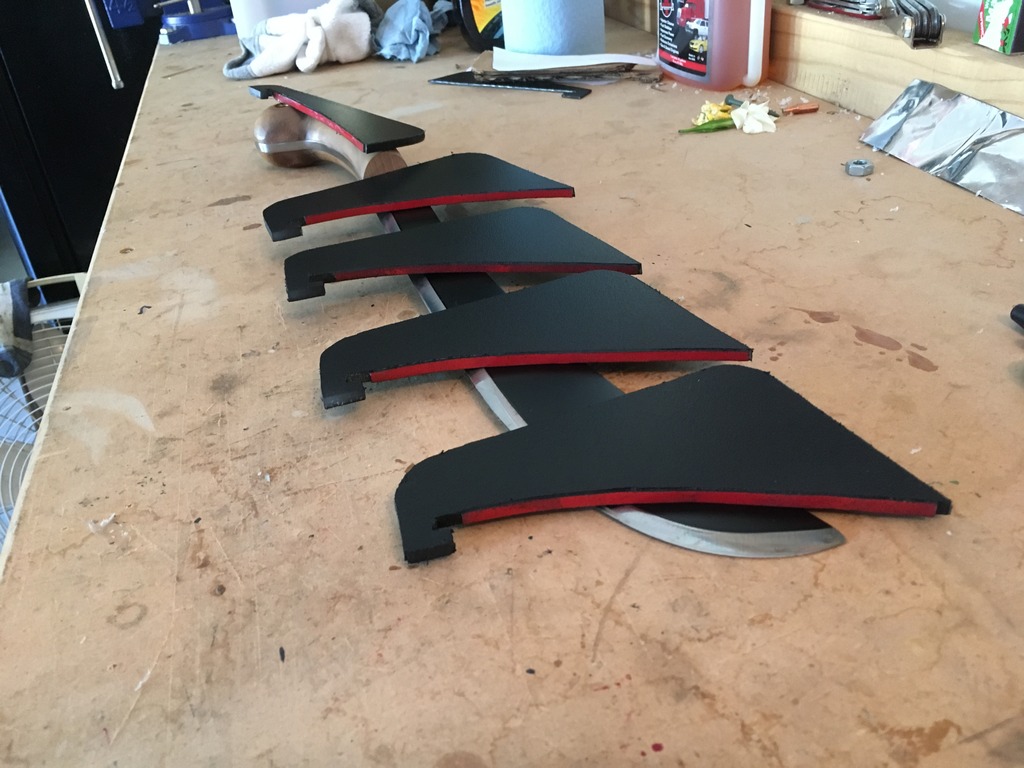 I love that look.

Makes me wonder how one might measure the effect of adding these. It would be fun to have video of yarn tests at speed with and without the fins. Maybe use a manometer to test pressure along diffuser before and after. In theory, fins should reduce turbulence and thereby reduce pressure, giving a little more downforce at rear.

I tested pressures front to back and found our rear wing is functional (how functional is a different question), but did not test down hatch to diffuser.

Yes, Jeff nice work as always. Thanks for sharing.

Great idea! For 6 bucks I might have to give this a shot myself!

Nice Jeff I will give this a try !

Wow! Looks GREAT! Can i buy a copy of ur cardboard templates? Im terrible at arts and crafts :\

is this just cosmetic? what do they do? i am scratching my head.
they kind of look like the udders on the under side of a cow.

Thanks for the regards fellas.

Today was the first day I drove around and got to look at the car in parking lots. They really look awesome. The black is super subtle but that's my MO. It does contrast well with the grey color I painted the lower bumper area.

I'm not sending out my template since these are being sold here. But someone mentioned earlier in this thread that there is one available for download somewhere online, I suggest that.

These diffusers are very easy to clone, provided someone has the original template to share.
I ended up buying these, and obviously I'm not going to share dimensions in order to protect VelossaTech and the original product.

I did something similar with my pedal spacer as it seemed like a pretty easy DIY and I found a template online (really just needed to know where to drill 2 holes) and made my own. lol

These diffusers are very easy to clone, provided someone has the original template to share.
I ended up buying these, and obviously I'm not going to share dimensions in order to protect VelossaTech and the original product.

I did something similar with my pedal spacer as it seemed like a pretty easy DIY and I found a template online (really just needed to know where to drill 2 holes) and made my own. lol

Click to expand...
Yeah the work is in getting the angles right. Though I will say that after you get a template made it still takes several hours to cut, sand, clean, paint, and apply 3M tape to them. So if you have money you're best off buying them, unless you're the creative type.

jeff said:
Yeah the work is in getting the angles right. Though I will say that after you get a template made it still takes several hours to cut, sand, clean, paint, and apply 3M tape to them. So if you have money you're best off buying them, unless you're the creative type.
Click to expand...
lol!, I bought mine and wasn't happy with the finish and decided I wanted to paint match it better, so I ended up sanding and painting them anyway. Sometimes being a perfectionist is too much for my own good.

darkjedidave said:
I ordered this today (https://www.thingiverse.com/thing:2122776). After printing and shipping, it's only $21.50. so if I don't end up liking them, it's not too much of an investment.
Click to expand...
I’m working on a modification to those fins to give a little wider base. Curious how well they fit as is.

it was beautiful! do you have a model?

max andrade` said:
it was beautiful! do you have a model?
Click to expand...
I don’t, but if you poke around you can find a model free for download that someone posted somewhere. I formed my own and discovered the free model later, but mine are still holding up just fine.