The humble Ford Fiesta – the perky little tearaway that it is – has always been a bit of a trailblazer. When the first iteration scampered onto the forecourts back in 1976, it offered something entirely at odds with the rest of Ford’s line-up: it was a hatchback and the driven wheels were at the front, which certainly gave the purists something to think about.
The firm’s number-crunchers clearly knew what they were up to; their £550m development budget was rewarded by sales of over ten million Fiestas worldwide across eight generations. The performance models, starting with the SuperSport and XR2, developed into a legendary halo in their own right; fast-forward to the modern era and the Fiesta ST is more or less universally revered as the archetypal bang-for-your-buck hot hatch. The Mk7 has already become a modern classic, having dominated pretty much every award ceremony and group test going, and when the Mk8 Fiesta ST launched in 2018, fans knew that something special was coming.
The bright orange example you see here is more special than most, being an ST Performance Edition. This limited-run 2019 variant came in vivid Deep Orange paint and benefitted from the Performance Pack (including the excellent LSD), lightweight flow-formed alloy wheels, and adjustable coilovers. The perfect package for track day thrills, then? Well, almost, but not quite…

“It’s a great car in all but one respect: the stock brakes just aren’t up to the job,”​
explains owner, Tim Rogers.

“Despite lockdown this year, I wanted to do more track days and found the ST Performance Edition to be an ideal car for the task, except for that one crucial element. Every time after a track day, the stock front brakes would be fried and need a pad change and bleed. Even when I went on the track for a short time, the brakes would forever afterwards feel both spongy and less effective when back on the road. I tried changing pad types and using better brake fluids, but it only made a marginal improvement.”​

Tim began to explore the aftermarket for big brake kits to suit this popular platform. After comparing various specs and prices, it was the quality and high specification of EBC’s Apollo Balanced Big Brake Kit which elevated it above the competition – coupled with the fact that it’s UK-sourced. These brake kits come with everything the buyer needs to replace the equivalent components in the factory braking system, to provide a firmer and more responsive pedal and allowing them to drive harder for longer without the onset of brake fade. A key element here (and the explanation for the name ‘Balanced’) is that it isn’t just a caliper, disc and pad upgrade for the front end, but also provides complementing rear pads along with front and rear lines.

“On opening the box, I was pleased at the quality and finish of the kit,” says Tim. “As an engineer in a previous life, I fitted them myself and it took around four hours. I would say that anyone competent on the spanners could do it, as the instructions were clear and there was a video available on the EBC website – that helped me understand the orientation of the brackets and components. Just make sure that you use proper axle stands and have someone around to pump the brakes for you when you bleed the system.
“I used a 5mm spacer to fit the kit over the car’s standard Performance Edition wheels. I chose the 330mm kit over the 300mm, as the inner profile of the Performance Edition wheel indicated that less spacing is needed and on the road, there’s a nice pedal feel and progressive brake bite with no snatch. Care needs to be taken as they are extremely powerful, but it doesn’t take long to get used to them and they are brilliant! On the track? Fantastic. Powerful with no fade, no overheating, no drop-off in performance. When back on the road afterwards, everything is as it should be until the next track day.
“BBKs are a considerable investment for a small car like a Fiesta ST and there are many people who may feel that it’s overkill. The fact is that if you ever track your car or drive ‘enthusiastically’, the Mk8 Fiesta brakes are not good enough. There are intermediate upgrades that work on the road, but ultimately if you want to ever take your car on the track, a BBK upgrade beckons – and in my experience, the EBC Balanced Big Brake Kit is up with the best of them.”​

, but that kit is right up there in price with the AP Racing setups.

Thanks for the reply. We do feel you get more for your money with our kit. 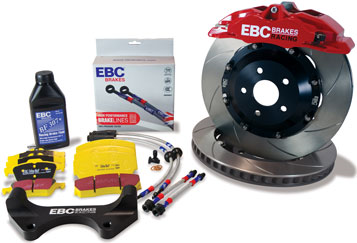 What is the Kit part #s? What spacers will you have to use or wheels to make them fit? Does it include front and rear?

Location
Los Feliz (In the City of Angels)

Well I would bet we would have an issue with that kit because MK8 factory wheels are 18’’s with a flat face spoke giving a lot of room . I think that caliper would be a hard fit on 17’s without a spacer. Forget 16’s lol
Though I know EBC makes a kit specifically for MK7.5‘s as Ron sells it.

TyphoonFiST said:
What is the Kit part #s? What spacers will you have to use or wheels to make them fit? Does it include front and rear?

*Change BLK to BLU, RED or YEL for other colours* in part number

TyphoonFiST said:
What is the Kit part #s? What spacers will you have to use or wheels to make them fit? Does it include front and rear?

TyphoonFiST said:
For Mk7.5 Stateside*
Click to expand...
Dpro said:
Well I would bet we would have an issue with that kit because MK8 factory wheels are 18’’s with a flat face spoke giving a lot of room . I think that caliper would be a hard fit on 17’s without a spacer. Forget 16’s lol
Though I know EBC makes a kit specifically for MK7.5‘s as Ron sells it.
Click to expand...
Our MK7 and MK8 ST BBK are not the same, these are two separate kits. MK7 ST = BBK007
Wheel clearance templates can be acquired from our website or by contacting kits@ebcbrakes.com